What's In A Name?

Some of you who visit me here call me Suzy.  Others know me as Susan.  To my family and long-time friends (those of you whom I met before I graduated from college), I'm Suzy.  But if you know me through work or through my jewelry line, chanced are you call me Susan.  Lines have started blur between the Suzy and Susan worlds, though, and I've got some friends who have become confused as to which name to call me.  I feel really silly that I go by two different names and feel awkward that I put people in the strange position of figuring out which one they should call me.  I think I may need to bite the bullet and pick just one.  My birth name is Susan, but I've been called Suzy my whole life.  Until, that is, I started teaching.

For a good stretch of time - from my mid-teens to my late twenties - I looked a lot younger than I was.  I didn't mind it much then, and I'd love it if it were the case now (it's not).  But when I decided to become a teacher soon after I graduated from college, I felt like I needed to appear older than my looks suggested both for the sake of establishing a position of authority with my students and for the sake of gaining the respect of students' parents and of other teachers.  I once had a parent tell me that she mistook me for a student at the school before she knew I was on the staff (I taught at an elementary school that only went up to sixth grade!).  Part of my attempt to come across as older than my appearance indicated included going by the name Susan instead of Suzy.  Susan sounds so much more mature than silly Suzy, right?

I taught for close to nine years, so I had some serious time to settle into being called Susan.  I ended up going by Susan in other professional situations, too, like when I applied for jobs when we moved to Portland and when I was dealing with all things related to sulu-design.  It just sorta stuck.  But even though Susan is my birth name and lots of people have called me Susan for 15 years now, it's definitely a lot less me than Suzy is.  I don't know, though, if I can ask people who have called me one name for so long to start calling me another.  It feels very forced and awkward.  Maybe I shouldn't ask anyone to change what they call me, but just go by Suzy from here on out.

What do you think?  Is it weird to be known by two similar but different names?  Is it strange to ask people who've called you by your birth name for years to start calling you by your nickname?  Are any of you in the same boat? 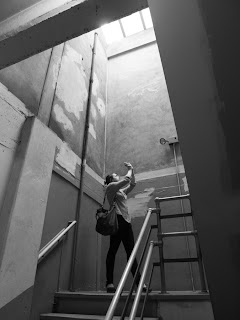 And now that I've asked what's in a name, how about what's in a face?  Or, in this case (thanks, Barry) half of a photo-taking face...
Posted by sulu-design at 1:18 PM

love that photo of you. hope you are well. xo

I have a close friend in college who altered her name from Kim to Kimmi after college. So it was weird when I would co-mingle with friends of her who met her after college and called her Kimmi. eh. I still call her Kim. And she still answers. My sister recently told me to stop introducing her by her birth name, Katlyn, and call her Kate instead. I figure a person will always correct me if I call them by the wrong name. I am in sales so I do pay extra attention to how someone introduces themselves, and I usually call them by what they call themselves (including what is on their business card.)

Susan, hello! Can't tell you how exciting I think it is to get face on you.

When I was in Jr. High I did not like having a different name and I had an opportunity to go by my middle name in a situation where no one knew me as Shona, so I went with Denise, which was a way cool name at that time because of Denise Huxtable. It was just weird, didn't fit, and I wouldn't react when people called me by that name.

Suzy it is! *smile* Its your name you just tell us what you feel in your heart *smile* With my name people shorten it all the time to Stef which is completely fine, I draw the line though at Steffy, only my grandmother is allowed to call me that!

I have a friend who has the same double-name conundrum. She started going by her given name in college and uses it professionally now (published author). It is confusing sometimes, but interesting!

Peter, Pete...like 'em both but could never pick one ...
seems it depends on who is talking to me and what the
context is...? I've got two very good friends who call me "Petey" ...not my favorite but I'm good with "Poppa"!
Love you Woo!!!!

I actually call you Sulu in my head 99% of the time! Hardly ever Susan. So please add number 3? I think you're fine to do whatever you need to do. Why limit yourself? Unless you don't feel genuine as Susan, and want to just go by Suzy. I'll start calling you that, and always smile when I see your parents' comments to Suzy.

Bottom line, do whatever you want, and we'll follow :)

P.S. Just wanted to laugh at my favorite Miss Shona aka Denise Huxtable. Off to email and razz on her now!!

I get it! I have the same thing with Beki/Rebeka. I've always gone by Beki to those who know me. Rebeka is for professional/legal stuff. I answer to both, but I suppose I'm really a Beki deep down.

I have a friend whose internet moniker is so much a part of her that I call her by it, even on the phone and in paper mail. If pressed, I can remember her real name, but using it seems bizarrely inapt.

The face question is interesting. I love to be able to put a face to a 'voice'...in fact if I have been reading someone for a long time and don't know what they look like, I feel......almost a mania to know what they look like. I think this is a bone-deep throwback to the days when your friends were flesh-and-blood people! And it made sense that if you didn't know what a person looks like, you didn't really know them at all.

Well Siouxie, you'll always be Suzy to me, even if some call you Suz, or spell it Susie! Susan is too formal for me as your Mom! But I do love writing Susan Elizabeth!

And as far as nicknames go, you know what happened to me at JCU since Maryann Breen worked there and Aunt Nicki called me Bebe. It is sometimes weird to be my age and have some JCU people still calling me that!

And then of course Dad calls me Bird, Barry calls me Maryanne, Jennifer calls me Mom and Tony calls me Nonna so I am used to answering to whatever people call me!

My name is Kristine but family and close childhood friends call me Krissy. I simply use both. At one point I tried to get everyone to call me Kristine but it didn't really work (felt too formal for people who'd known me forever) so I left it alone. I now like that people call me different names because it marks how long they have known me when I hear Krissy. Plus inside I still feel like the girl known as Krissy even though most of the world knows me as Kristine.
I think you should introduce yourself with the name you prefer from now on but know that people in the past may still refer to you by variations of your name.

I saw this today and thought of you...

I have a similar problem, my given name (Elizabeth) is different from the name I've always been called (Elise). So often I am in a quandry as to what name to give to people. Still I don't think I could ever change my given name to my nickname because my grandfather used to call me by Elizabeth and therefore it has sentimental meaning. It's just strange to be called Elizabeth when visiting the doctor or doing something else where my legal name is important.

SUZ!! You are totally Suz or Suzy to me. The Susan thing is far too serious for someone as fun and silly as you.
Hope you guys are great - we are missing you like crazy.

Suzy! I am going to try my best! We might need a silly date with Betsy to seal the deal, I have Susan stuck in my head from meeting you at the dress shop! I cringe when people call me Jennifer! Do you find yourself more at ease when being called one name or the other? That might help make a decision!

I love having two names! (Constance, or Connie) I go by Connie, but if I need to pull out all the stops, it's Constance. Dr. Constance. Sounds like someone with that name should be listened to ;)

Hi
sulu-design
Excellent post I Love it, you just gained a brand new reader. Thank you and best of luck

I, like Marissa, think of you, affectionately of course, as Sulu :-)

For me, it wasn't my first name; it was my last name. When I was born, my mother designated her maiden name - Bennett - as my last name, even though my father was around when I was around. This meant, of course, that Bennett was my legal last name.

When he registered me for kindergarten, my father designated my last name as Cooper - his last name. Imagine my confusion when I went to get a state ID card as a teenager and learned that I was Tyra Bennett and NOT Tyra Cooper as I ( and all my friends and classmates)had known myself to be. Whuh?!!

At any rate, I had to legally change my name to Cooper. It was kinda traumatic at the time.

What an interesting discussion. I think of you as sulu, too. :) as does my hubby. And of course, ever so fondly. :)