It's All My Fault

While it probably hasn't captured the attention of the rest of the nation, the weather here in Portland and the surrounding areas is all anyone in these parts can talk about. We've been getting dustings of snow for almost a week now, with plenty more than just a dusting expected in the next couple days. If you read any Portlanders' blogs, you know that this has meant school closings, snow days from work, and shortened hours at stores. Yes, we've only had mere dustings, but the city is unprepared for any snow, so the smallest snow fall brings things to a grinding halt... fun for many, but not so great for small businesses, especially in these tough economic times (I say that phrase with a sneer on my lips... while I am completely sympathetic to those hard hit by the state of the economy right now and am feeling the effects of the busted economy myself, I am beyond sick of hearing those three words strung together). 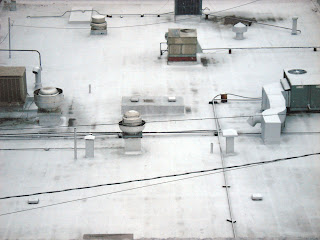 Well, folks, to be honest, I think I ought to take the blame here. When I was in Cleveland - snow-covered Cleveland - over Thanksgiving, I couldn't shut up about how great it was to live in Portland, where the winters are mild and we don't have to deal with snow all season long. "When we want snow," I bragged, "we can head up to Mount Hood. And then we return to our snow-free city when we're sick of it." To the business owners, I apologize. I should have kept my big mouth shut. But to those of you enjoying the change of pace and the pretty flakes, you can thank me later. Nothing says thank you like caramels covered in dark chocolate and sprinkled with sea salt. Just saying.
Posted by sulu-design at 8:39 PM

I know! The snow is crazy! We have it up here too. Which is normal for the rest of Canada, but not Vancouver. I just sent Phil to work a graveyard shift outdoors in 10 C below freezing weather -- I feel so bad for him!

you are so funny. we are getting dumped on with snow here. but this is a very common thing for us northerners. i'm thankful that it's the weekend and that there is no commuting required for my husband.

I am so sick of hearing about the tough economic times, too. it's old news.

You *would* take the coolest photo of snow, ever! xo

crate and barrel has some excellent salted caramels. whoever thought up that combo is my hero.

It's good to see someone out there taking responsability + owning up to their actions.

[now for the indication that the above comment was a joke]

I am so glad you had a new blog to read while I am snowed in and bouncing off the walls! Hope you are staying warm and productive while we are goinng through "arctic blast" and "deep freeze" '08 (i am embarrassed for portland not only by its reaction to snow, but then the names associated with it). well, I think we are off to the nearest parking lot for some donuts. :)

You want mild winters? Time to move out here...we were predicted to get 17+ inches, and got about an eighth of an inch instead. Flagstaff got 3 feet (it use to snow AT LEAST that amount here when I was a kid...it was awesome!) The weather casters here are FREAKING OUT...saying things like..."RAIN! SNOW! WILL IT EVER END?!?!?!"

We live in Arizona you nut-bag...

As I speak, it's sunny and cloudless outside...

Well Susan, I am here to thank you. I couldn't have wished for a more magical winter. I wlaked all around this morning taking photos and was happy to find out that it's a snow day at work! I'm gonna make some biscuits and work on my website. I couldn't be happier, really. So thanks!

And here I thought is was some 3rd grader asking Santa for snow for Christmas.

You crazy snow-maker-blamer! I'll just sit back and laugh at Shona's comment :) Enjoy it, and don't be too hard on yourself.