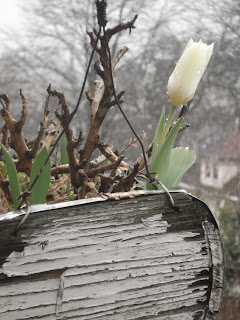 In a mess of weeds that hang in planters on our fire escape (we'll tend to them eventually... I swear), a delicate tulip-like thingie bloomed this week. Unexpected beauty.
This morning, Portland got a pretty decent dusting of snow, which is rare here. After dealing with the harsh winters in Cleveland and New York for more than thirty years, I am so over snow. Unexpected ugh.
I'm on a somewhat new work schedule this month, and realized this morning that I have an extra hour before my work day begins. Unexpected free time. Which resulted in an unexpected sulu-design shop update: 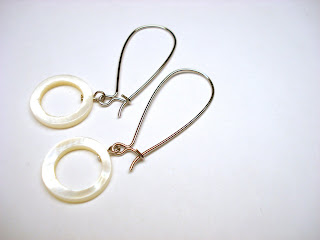 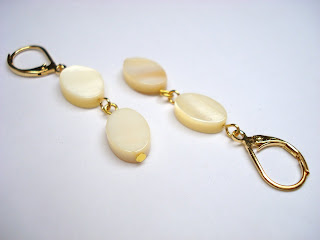 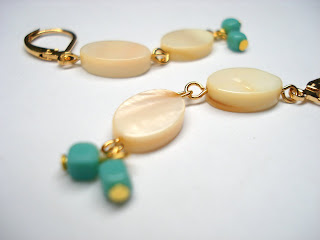 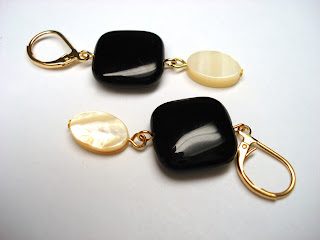 Thirty minutes later: The snow has officially turned to rain. Now that's what I expect from Portland. Happy weekend, all.
Posted by sulu-design at 9:37 AM

I love the look of the white beads... they remind me of a flat mother of pearl :) so pretty.

Have an "unexpected", fun + relaxing weekend!

Beautifully put together post!
Elegant earrings...I really like the ones that have teal beads at the end.

Our snow is now rain too. Gotta love the NW!

Susan, I love the mother of pearl round earrings and believe that it would also make a great matching( I know how you feel about that concept)necklace. Also love the round, red stone necklace. I enjoy reading your posts which keeps us up to date with what is happening in your world. Have a wonderful weekend. Marilyn

That is an interesting tulip-thing indeed...at least it matches the snow right?

Enjoy your "found" time, Susan! Spring is around the corner :)

The unexpected earrings are tres cute. The pops of turquoise are very sweet!

I love those mother-of-pearl beads. These earrings are so lovely. Hope you have a great weekend!

and I am with you being soooo over snow. and what a pleasant surprise to have an unexpected bloom in your planter.

I agree with c.rachel, what a beautifully put together post.

these are so lovely susan!

Are you going to make more of the Checkmate Earrings? They're all sold out and I love them.

ha! that *is* so unexpected! your posts have been so cheery lately :) {and by lately, i mean, the 4 proceeding this one that i just read} thanks for making me smile!