The Sincerest form of Flattery, Part 4

My inspiration for today's post comes less from seeing others' finished products than it does from knowing about their process. I'll admit it: I've always been a little envious of bloggers who post tutorials. I want to be in their tutorial club. I've wished that I had a skill that was worth documenting in a series of photos, and that could be demonstrated well enough in a forum like this that readers could follow it and make something themselves. 'Cause tutorials make pretty rockin' posts. Cases in point:
Amandajean has been posting her knock-out quilt-along tutorials for weeks now (aside from her other technique tutorials). Clearly, this is no small undertaking. And clearly, her readers love it (check out the list of ladies, found in her sidebar) who are quilting along with her.

Erin, always practical and prolific, has posted some great sewing tutorials. Must learn to sew - to really sew.

And Sonya recently posted the sweetest little tutorial on putting scrap yarn to good use during the holidays.

Guys, I want in! Happily, the perfect little tutorial project dawned on me as I was making my second string of garland this year (the first had become window frame garland - we needed more for our tree). I realized that I could show you this silly little finger knitting technique that I did as a kid, which can be used to make garland or decorative strings for tying up packages, or it can simply be used to keep little hands occupied while big hands are preparing for the holidays themselves:

First, tie the end of a ball of yarn loosely around the thumb of your non-dominant hand. On that hand, pass the yarn over the pointer finger, behind the middle finger, over the ring finger, and behind the pinky, like so: 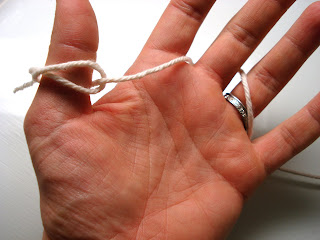 Then, pull the yarn forward and wrap the fingers with it in the opposite manner, going over the pinky, behind the ring finer, over the middle finger, and behind the pointer. 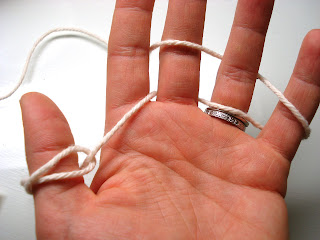 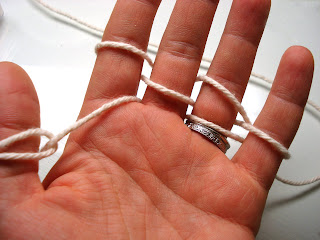 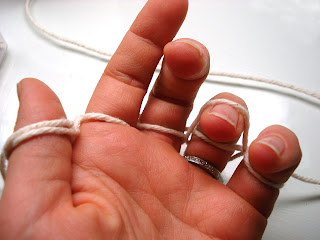 Now, wrap the yarn around the pinky, behind the ring finger, over the middle finger, and behind the pointer. Slip the bottom two portionss of yarn (which are on your pinky and middle finger now) over the top yarn and to the back of your hand. Continue to wind the yarn around your fingers in the same pattern - forward, behind, forward, behind - and pull the bottom bits up and over the top bits, two times per wind. Eventually, a little web will grow along the back of your hand: 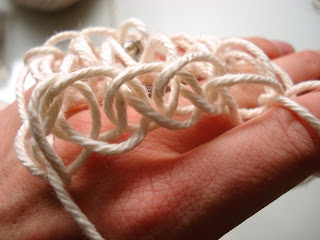 As it gets longer, it makes a pretty little chain: 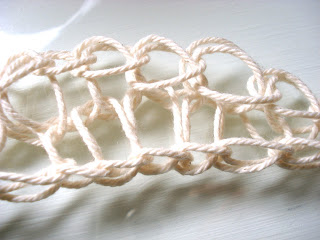 And if you tug on it, it makes a sweet little rope. 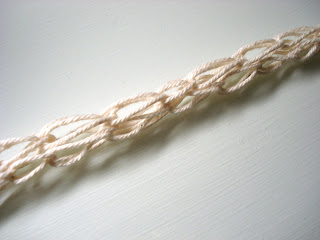 Between making a rope that's long enough to circle our tree many times over and typing this ridiculously verbose post, I need a break... with a cup of coffee, in front of our garland-wrapped tree. 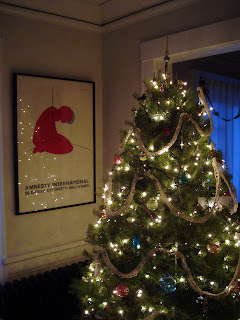 EDIT: How did I forget to mention Liz's post, with her own garland tutorial and tutorial links galore?!?
Posted by sulu-design at 9:53 AM

I totally used to finger knit when I was a kid too. I love the idea of using it for garland!

What a fun blog! I want to come over and have coffee in front of your beautiful tree! Merry Christmas :)

so lovely susan. your tree looks so perty! this is also a great train activity... me likes.

What a great tutorial! I like how you show the tree at the end, it looks so beautiful with your garland.

I spent hours and hours doing this as a child. Hours. I had many many yards of finished garland with no particular use for it, but I knew I just loved to finger knit.

Suzy, your tree looks gorgeous! Ours is up but not decorated yet and I know time is running out - family coming this Sunday.

Nicholas and Martin will be excited to learn finger knitting, think it will be a little too difficult for Mari yet but they have loads of yarn that I have given them.

You have inspired me to get going with the decorating. Love, Mom

I forgot about this finger knitting technique! Thanks so much for sharing :) Your tree is beautiful.

Oh...that's a wonderful tutorial! And, it looks just amazing on the tree as well...

thanks for the tutorial susan!

I have never finger knitted before. I will definitely try this out.

Your tree is so pretty and grown up looking :)

susan, you are so cool.

I love your tutorial for finger knitting. (I was trying to figure out how to use it to make a rag rug a few weeks ago...I didn't get too far with it, sadly.) But I love the idea of using it for garland and for packaging and so on. it looks fabulous on your tree! thanks for the wonderful idea. maybe a good craft project for the kiddies, too. (if they don't strangle each other first!) welcome to the tutorial club, btw. ;)

Hey you, thanks for the tutorial love! And do you know that I never learned how to finger knit. I've always had these finger-knitting savant/children who would whip along and (with scorn, maybe?) never managed to teach me. Now I have a handy, step-by-step tutorial! And I love, love, love how you've used it to trim your tree.

your tree's beautiful and you're right, this is a good tutorial! see you're in !

OKAY!! I have to do this NOW.. Must go get yearn!! yipepeeeee

oh man. this is going to the top my list of 'things to do when i can use my left hand again.' (because i can't help but place it in front of 'wash my right arm-pit.' which is a testament to just how fabulous this is.) so brilliant.

hehe. I can totally empathize with you on the tutorial front! I manage to ek out one tutorial a year; they just get so darn complicated (or maybe I just make them that way)! lol. I love your garland tutorial; I am going to bookmark that for reference ('cause I'm always looking for something easy to keep my hands busy!). :)

Hope you're having a lovely, creative week!

i am so taking a ball of yarn on the airplane next week! thanks for this. fun, fun.

That's a great tutorial! I've never heard of finger knitting before. It must have taken you a while to make that garland but so worth it! It looks fab!

oh i remember doing this as a kid...so much fun! i sometimes find myself finger knitting without even realizing it when i am siting holding yarn. using it for garland is genius!

happy thursday before christmas to you dear girl!