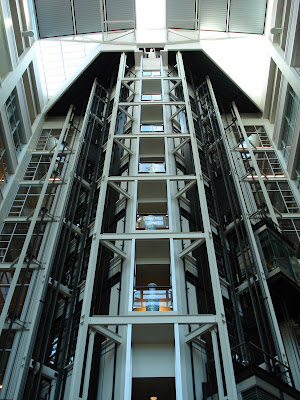 and so are 95 percent of the people who do their bead shopping at them. I'd like to think that I'm in that remaining five percent, but who am I to say? I did pick up a few strands of pretty beads at Portland's bead show yesterday, which will show up in earrings sooner or later. But for now, I'm hoping someone can explain to me why bead sales are such magnets for the throw-back, post-hippie, wannabe Rasta crowd? Or maybe that's just the way Portland rolls. I mean, I love The Harder They Come soundtrack as much as they next guy (probably even more), and I've burned Nag Champa in my apartment once or twice, but really folks...
Posted by sulu-design at 6:39 AM

You can call me Betty, or Bethany, or Beth ...Just don't call me late for dinner. said...

Welcome back to the west coast..
I always laugh a little at bead shows. Aparently the gang that used to follow the Dead are now following the beads.

Hope you are having a great weekend. Looking forward to seeing your new creations :)

ha ha ha. i thought you were going to go off about the *bead ladies* who frequent those things. you know the type...

Patchouli oil is not an acceptable substitute for a shower!
I know people who go to the national gem show in AZ every year + they describe this moment in which you cannot see one more stone- you just instantly go blind and never want to return to another show.
And then there is next year.

Ha! So your in the minority now, eh? My friend own a few bead stores in the area, and every time I stop by for a visit she excitedly runs over to spend a little part of her day with someone "normal". I can't wait to see what you bought!

Ha! Yes, that is how Portland rolls. Though I think my boyfriend was going to die if he saw *one more* dreadlock when we were in Barcelona.

can we see a photo of all your loot from today? was it enjoyable at all or was it just plain scary?

Wow...it sounds like quite an adventure! So...that's why happened to all the people who followed The Dead eh?

First of all, that picture looks like The Death Star from Star Wars. Second, you are hilarious. It's not snobby, it's just true!

At least the bead people sound better than frequenters of Faery Conventions and those people who dress like stuffed animals and perform unspeakable things! Ha ha ha ha ha!

i think the lure of portland AND shiny beads was just too much for them to resist. it must have been like mecca.

i'm glad you were brave enough to go though! i nearly went to the quilt show last month, but chickened out, for fear of a sea of holiday earrings and broaches, and the smell of ammonia (there are a whole-lotta perms at quilt shows)...

i'm glad you picked up some great things, regardless!

west coast living. it's just how it is. whimsical. purple. patchouli. I heart vegetables.