Or, as Barry and I realized as we sat in Gramercy Theatre last night, listening to bluegrass music (which is great and all, just not what we expected)...
Thursday night, Holly Golightly, Mercury Lounge.
Friday night, Clinic, Gramercy Theatre.

Ooops. Luckily, we weren't too late to catch Holly. Her show started much later than the random one that we accidentally dropped in on. Now I'm off to the Clinic show. 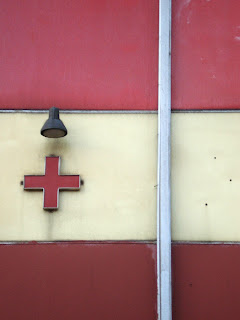 I'll leave you with this photo of the facade of the Family Dental Clinic in the Bronx that I pass every day on my way home from work. Other than the word "clinic," it has nothing to do with the band that I'm off to see. That's the kind of week it's been.
Posted by sulu-design at 3:41 PM

You're funny! :0) Hope you have fun. And that cross reminds me of the cross pillow I think I've seen in one of the pictures of your couch?

oh my goodness i love clinic!! have fun!!

kinda reminds me of the Red Cross though I'm sure totally unrelated.....
glad to see Freedom has still got you moving right along

Sounds like something my boyfriend and I would do. We're just lucky like that, I guess! Haha, hope the shows were good!

hope the clinic show was a good as your pic :)

Omg your etsy mini looks amazing...isn't it the best!! Yay!